Why are some shanties so incredibly long?

If you have ever ask yourself that question, after leafing through several pages of verse, then this fact will indeed surprise you; those are the condensed versions. Most of what was sung aboard sailing vessels was never written down and little of the original survives today. A shantyman had to be very adept at improvisation and often was pressed to make up hundreds of verses on the fly. If a shantyman was worth his salt, those lyrics would be tailored to fit the vessel, crew, and situation.

If I were to sing “Leave her, Johnny” at our song circle and adapt the shanty for the moment, I might chant,

...”Well our old man sets too much sail,

Leave her Johnny, leave her,

And we’d all be better of in the Hadlock jail,

The reasons that the vessel’s musical voice had so much verbal ammunition at his disposal was multifold: first and foremost was the fact that many tasks took hours. To illustrate this I’ll use just one example: Down-rigging - 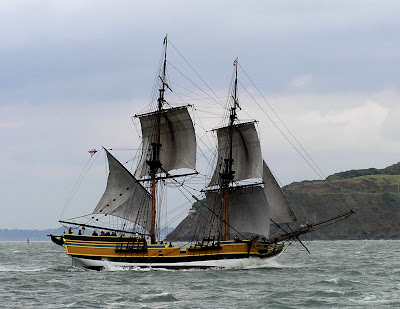 Lady Washington in a fair topsail breeze - going all out

It is almost time to reef

When you spy a tall ship and gaze up in wonder at all those sticks silhouetted in the sky, you can rightfully think of them all collectively as “spars”. On a full-rigged ship you have, (by definition) three masts: fore, main, and mizzen. Each mast has three sections: a lower, top, and top gallant mast - and (believe it or not), those masts are built to be disassembled by the crew. In the case of a “square rigger” the yards, (the spars that the sails are bent onto) are oriented at ninety degrees to the keel, or “square” - that’s what makes her a “square rigger” (not the shape of the sails). You can think of the bowsprit as a fourth mast, laying nearly horizontal, with its own yard(s) and sails. All of that rig is either tied, wedged, or pegged together and so is built to come apart and be put back together again, at sea! Only the lower masts and the stub of the bowsprit remain semi-permanently in place, and would require specialized effort to remove and replace. Why vessel’s rigs evolved this way was for ease of replacement, (smaller, lighter, parts), and to control windage*. 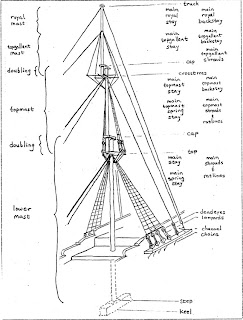 Wind is the essential fuel that drives a vessel across the seas, but you often have too much or too little. With a finite supply of food and water, and narrow profit margins, it is essential that the crew presses for as much speed as they can muster. This means cracking on every bit of canvas when the winds are light. However, if Poseidon does grow angry, and the sailor feels the sea’s fury as the vast ocean wars with Mother Nature in the skies above, it is then time to first reef, then furl sail, then stream the yards, and finally sway those yards down to deck. In the most extreme blows, the top gallant masts are “housed”, telescoping down into the top masts, like a modern day aerial. If even that is not enough, these masts are lowered the rest of the way to deck and lashed down. In the most desperate of circumstances the top masts receive the same treatment, lowering the vessel’s center of effort further in an attempt to keep the ship from foundering.

Wind only powers a vessel through the sea. For all of the tasks described above you need human backs, brawn, wooden blocks, fathoms of line, a windlass or a capstan, and lots and lots of shanties.

Imagine it now: It is morning and the mighty Pacific has blown herself out at last. Your vessel is an awful mess. Many sails are in tatters and a handful of the crew are hastily stitching the sodden shreds back together, while still more are bending on the ship’s second suit of canvas. The shantyman has gone hoarse from bellowing to those manning the pumps, watch after watch, as the vessel wallowed through the towering waves overnight - hove to and taking water on at an alarming pace. Now her rate of roll is quickening as the last of the water is forced up out of the bilge. The pumps at last go silent.

The tempest has past. Time to get the glad rags on. The captain makes the decision and the mate calls his orders out to the entire crew. Everyone pitches in to put the rig right. The capstan goes into motion and the first top mast crawls skyward. Over the next several watches thousands of pounds will be hauled back up into the aether as the vessel regains her lofty stature of one hundred eighty two feet. Hundreds of knots will be tied, binding the miles-long spiderweb back together, before she again spreads her wings and hurries on eastward.

And through all of this, there will be song. 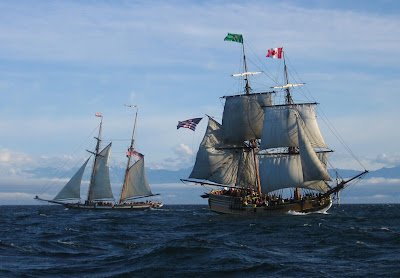 *Even with every sail tightly furled, the brig Lady Washington’s rig presents more surface to the wind (windage) than a typical 32 foot sloop does under full sail.

Note: (1) The yards gain their names from the masts they are associated with: Fore Top Mast - Fore Top Yard. (2) A full-rigged ship has three masts, comprised of three spars apiece; on each of these three-part masts hangs three yards. Do the math: three yards per mast, times three masts, equals the "whole nine yards". And now you know where that saying comes from.

About Mark Olson - Mark gained his knowledge of maritime song and lore after he came aboard the Pacific Northwest's fleet of tall ships "though the hawsehole:. Beginning at a deckhand and slowly rising through the ranks, Mark retired in 2005 as the Northwest Regional Port Captain and now remains in an advisory capacity to the Grays Harbor fleet. His great love while voyaging aboard the West Coast's many sail training vessels was teaching both the craft and history of traditional sail. Mark's diverse experience allowed him the pleasure of working alongside some of the world's foremost shantymen and women.