Other Song Circles and Events

If you have a Song Circle or Maritime Event happening in the Pacific Northwest send us an email - we'll post it here.


2015-2016 Events
Other Places to Sing Sea Shanties Around Washington

Usually the second Friday of the month at or near Lake Union Park. 8 to 10 pm.

The second Saturday of the month, 7 pm at Round Table Pizza (1435 George Washington Way) in Richland, WA.

2013-3014 Events
Other Places to Sing Sea Shanties Around Washington 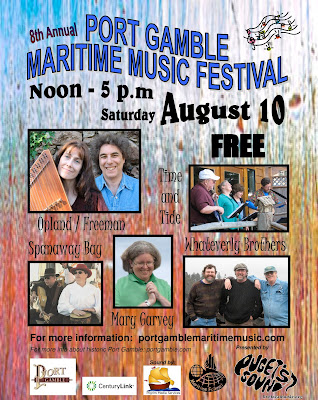 This weekend, there will be a lot of great maritime music at the Northwest Folklife Festival in Seattle:


For more information about maritime music, please read Alice's Maritime Musings column in the online Victory Review Magazine. Victory Music has a new website, you can read the May Review at VictoryMusic.us


The Second Saturday Sea Song Singing Session - Each month, TRFS sponsors, jointly with Richland Round Table Pizza, the SSSSSS. The emphasis is on a cappella singing, and not exclusively sea songs. The event begins around 7:00 PM, at Round Table Pizza, 1435 George Washington Way, in Richland, WA (street map). This is the former location of Henry's restaurant.

The sixteenth annual Fisher Poets Gathering in Astoria, Oregon on February 22-24 will be one of the highlights of the maritime year. Along with the commercial fish folk who converge to dramatize their poetry and tell stories of the sea, there will some maritime musicians linked to fishing or the history of the area. Already registered are Mary Garvey, Hobe Kytr, John Palmes, and Shanghaied on the Willamette. Brownsmead Flats have been there nearly every year, and are likely to be there again. Give this offbeat festival a try; it’s an experience you won’t forget.

A look at life at sea for women from the 18th century to the present, including Wendy’s own experiences, and will have sing along opportunities.

Wendy Joseph vies with her characters for a life of romance and adventure. A deckhand on merchant ships, she has outrun pirates off of Somalia, steered ships large and small through typhoons and calms from the Bering Sea to Shanghai, and helped rescue seals on the Pacific coast. Believing history must be lived, she has crewed the 18th century square-rigger Lady Washington, the steamer Virginia V, the WWII freighter SS Lane Victory, and the moored battleship USS Iowa. She has shared her food with Third World workers and starving cats. A musician, she sings sea shanties, her songs, and with classical and medieval choirs. She holds two Master’s in English and can splice a twelve strand line. Her plays Gargoyles, The Hamlet Interview, Oil in the Sound and Booking Hold were produced to acclaim in Seattle, and she appeared in the movie Singles. Her swashbuckling novel The Witch's Hand was published last spring. Ashore she holds court with her cats Jean Lafitte and Bijou in the wilds of Washington State.

Mar 17, The Shifty Sailors at the Coupeville Rec Hall.

The Shifty Sailors will be back for the Sixth Annual St. Paddy’s Day Bash at the Coupeville Rec Hall on March 17 from 6:00 to 9:00 pm. Joining them will the jigs & reels group Eclectic’ly Celtic.
Mar 16, The Whateverly Brothers at the Devil Fish Pub in Chehalis
March 17, The Whateverly Brothers at Finaghty's Pub in Snoqualmie Ridge.
Mar 22-24, Singtime Frolics, Camp Adams near Portland.

Singtime Frolics, on March 22-24, is another singing retreat, similar to Rainycamp and Sunnycamp. It’s called ‘a relaxing spring weekend of singing, jamming, learning and sharing’. The location is Camp Adams, an hour's drive from Portland, near Molalla, Oregon, and the hosts are the Portland Folkmusic Society. This will be the 29th year for this event. There are some cheap deals on public transportation to Portland, on Amtrack or Greyhound, or the Bolt Bus (the cheapest), and if you ask the organizers when you register, someone can pick you up at the station in Portland and take you to the camp. While it’s not a maritime event as such, there are always a lot of maritime songs sung, and often a maritime music workshop. 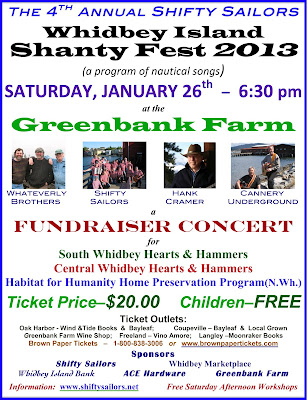 Four groups will be performing this year at the 4th Annual Shanty Fest at the Greenbank Farm on Saturday, January 26th, beginning at 6:30 pm.

Two groups – Hank Cramer and Cannery Underground, will perform for the first time, adding a new dimension to the fest.

Winthrop, Washington’s Hank Cramer is a master of the traditional and contemporary folk songs, and part of that repertoire is songs of the sea. A former shanty-man on a square-rigged sailing ship, he brings his booming bass voice, smooth picking on a vintage flat-top guitar, and a wry sense of humor to the event.

Cannery Underground, a duo hailing from Guemes Island/Anacortes, specializes in original Northwest folk music with a touch of humor and a nautical twist. The group members include Tim Wittman (guitar/vocals) and Dave Perkins (acoustic bass/vocals).

Returning from last year, the Whateverly Brothers once again will add their special talents. By popular demand we look forward to another great performance by the bro’s. Dan Roberts, Chris Glanister and Matthew Moeller have performed for many years as solo artists and members of obscure folk groups across the Pacific Northwest.

The Shifty Sailors, main sponsors of the event, this year will celebrate the whale. Now that the State of Washington has chosen “Tokitae” as the name of its next ferry, the group will honor this selection with songs about whaling, and saving the whale.

ALL proceeds from this year’s Fest will benefit South and Central Whidbey Hearts and Hammers, along with a newby – North Whidbey’s Habitat for Humanity’s Home Preservation Program.

The concert is indoors in Barn A, and beer, wine and other refreshments will be available. Whidbey Pies will also be open up until 6:30 pm that evening. There will be workshops during the day featuring the four performing groups.

Tickets can be purchased at Wind & Tide in Oak Harbor; Bayleaf in both Oak Harbor and Coupeville, Local Grown in Coupeville; the Greenbank Farm’s Wine Shop; Vino Amore in Freeland, and Moonraker Books in Langley. Tickets are available at Brown Paper Tickets (800-838-3006 or www.brownpapertickets.com).

2012 Events
Other Places to Sing Sea Shanties Around Washington


Northwest Seaport Chantey Sing - Seattle, WA. Second Friday of the month, 8:00 to 10:00 p.m.
Hosted by the NW Seaport Maritime Heritage Center at or near Lake Union.
Free, but donations welcome.
For more information go to: NW Seaport or call (206) 447-9800

Budd Bay Shanty Sing - Olympia Wa: The first Sunday of the month, 7:00 to 9:00 p.m.
Winter venue is Apollo Pizza & Pasta at 2302 Harrison Avenue NW on Olympia's west side near the bowling alley. The summer venue is the Boston Harbor Marina. For more information go to: http://home.comcast.net/~burtabard/ or call 360-844-4296.


Scroll down for the most current event and those later in the year:

For more information, go to: the Shifty Sailors' website. 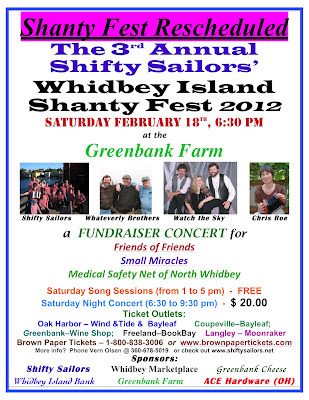 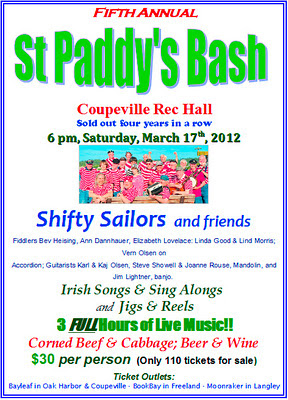 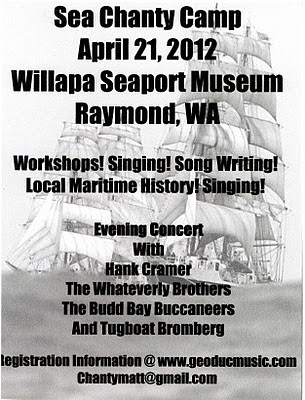 On Saturday, August 11th, from Noon to 5 pm, the  Port Gamble Maritime Music Festival will have 5 hours of FREE live music with Piper Stock Hill, Cannery Underground, Spanaway Bay and Watch the Sky.

"Imagine sitting in a natural amphitheater overlooking picturesque Gamble Bay on a warm August afternoon in the Pacific Northwest and looking out where once the oldest operating sawmill in the United States processed and shipped lumber all over the West Coast. Steeped in history, Port Gamble is the perfect place to have one of the West's few maritime music festivals. Now in our seventh year, we've played host to the cream of the Northwest maritime music community and continue to have much fun doing it!" - Port Gamble Music Festival. 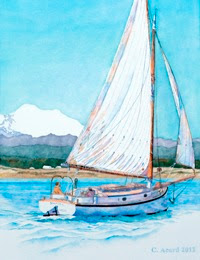 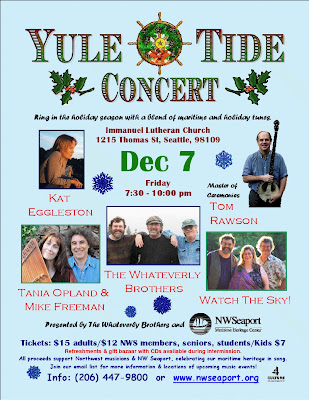