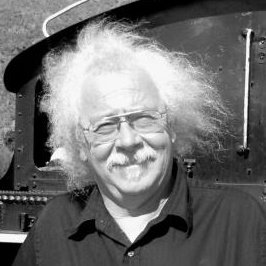 John Wesley Sparrow was born a long time ago and far, far away but quite near his mother. Shocked and surprised to find himself in bed with a woman, he immediately began singing loudly for his supper. His father heard the noise and believing he detected a nascent budding of musical genius, he swaddled the infant in an old coat and carried it straightway to the doorstep of a nearby conservatory of music.

John was taken under the wing of Professor Dieter Von Helgenringer to matriculate a classical music education. He was drilled in memorizing the first seven letters of the alphabet, how to count to four and to sit on his own stool. Further education was abruptly ended when he was told by the lunchroom overseer to eat every potato and pea on his plate and did.

Returning home, John was given a warm welcome by his family until the day his father bought him a suitcase for his 16th birthday and his mother packed him a lunch. Venturing out into the world, the boy began a long sojourn occasionally interrupting his natural proclivities for sloth and indolence by working for brief periods of time as a pearl diver, broomsman, sewing machine repairman and yellow journalist. The occupations did not secure his attention however, and he chose not to apply himself to anything much beyond storytelling.

His storytelling abilities can be traced back to his early years where he was very gifted in telling whoppers. It was his mother's fault. She was much too curious and rather than hurt her feelings, he began to elaborate and fabricate until he was quite good at it. Not good enough to fool her, of course, but still and all better than average. This gift lead him into many colorful adventures and form the basis for a truly remarkable set of songs.

John has been a married man for over 40 years. It was to four different women, but who's keeping count? He has no children and believes the secret to happiness is to have your grandkids first. There is some old man who stands on stages from time to time and tells everyone that he is John Sparrow. His songs have been sung and recorded by many artists. Most of them sound better than John but that doesn't discourage him from trying.

John is the founding member of Victory Sings at Sea, Vol 1. His songs have been recorded by Hank Cramer, Shangied on the Willamette, The Shifty Sailors, The Ferryboat Musicians and more, and is about ready to release a new CD… and will have it available at our Oct 3rd shanty sing.

See you there, mateys! 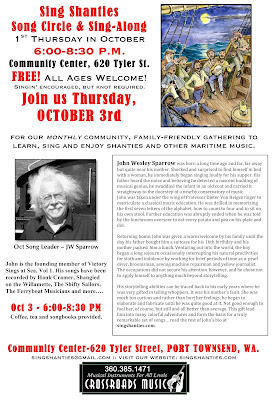