Dan Roberts and Chris Glanister of the Whateverly Brothers will lead the next second Wednesday Song Circle on November 11th. 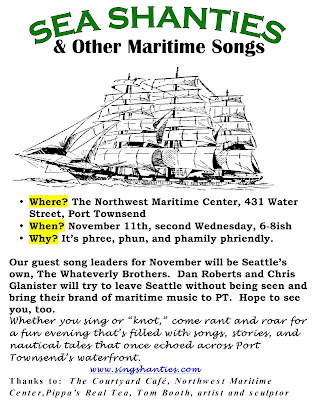 Video: "Son of a Son of a Sailor" with Pint and Dale and Jan Elliott- Glanister at the Conway Muse, October, 2014

Dan Roberts - "As the eldest brother, Dan has the most experience in music and performing. Raised in the Bay Area and coming of age in Berkeley (he swears he has no memory of that), he also studied opera and received the training that makes his voice one of the most notable and powerful in the folk music community. A true folkie, Dan’s repertoire spans decades. It also spans three octaves which allows him to sing lead, bass, or make strange noises. He also plays a mean set of spoons and admits to being a recovering elementary school teacher."

Chris Glanister - "Chris has been hanging around folk music for too many years and it shows (mostly in the waistline...). He grew up in England listening to Burl Ives, Pete Seeger and the popular British folk group, The Spinners, along with Led Zeppelin, the Monkees and lots of classical music. As the
co-founder of the local Seattle celtic band Watch the Sky! he has been entertaining audiences with his whistle playing and vocals for many years.

He started his musical career as a recording and live sound engineer and at some point had to play the music he was hearing. He's since added bohdran, cittern and cowbell and banjo to his musical lineup, and loves the Scottish and maritime influences in the music he plays."

Have another listen - "Haul Away Joe."
Posted by Lee Enry Erickson at 4:41 AM No comments: