for our monthly community, family-friendly gathering to learn, sing and enjoy shanties and other maritime music.

Join us on Thursday, November 7th for a rousing song circle and sing-along with shantyman and minstrel Dan Roberts! 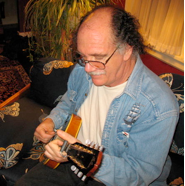 “A voice as masculine as John Henry’s biceps and as rich as a well-oiled wooden boat’s deck.” – “Playing music that can be fun, enriching and participatory… Dan does this about as well as anyone.” - Victory Review


Dan Roberts… with his big baritone voice and whose musical background ranges from opera to street singing, is an engaging entertainer, known for his powerful voice, various vocal stylings, and encouraging audience participation on choruses and familiar songs. Dan’s performances are always fun and interesting. In addition to the release of his own solo CD “Rowing Minstrel,” he is a featured performer on the albums “Victory Sings at Sea” and “The curse of the Somers,” both by Victory at Sea. Dan also performs with the groups The Whateverly Brothers and Seattle Labor Chorus, and as a soloist at fairs, festivals, aboard several historical ships and many other venues around the Pacific Northwest. Besides singing, Dan has a background in radio and theater. Dan plays the guitar, mandolin, spoons, penny whistle and Appalachian mountain dulcimer. Among all the styles of music he performs, Maritime music is one of Dan’s favorite genres to play and sing.