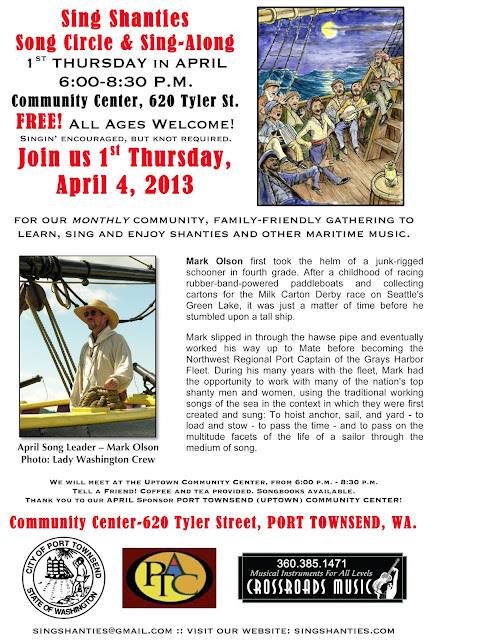 Please join us for our next, first Thursday shanty sing with our April songleader, Shanty man Mark Olson. Mark is a Port Hadlock resident, active participant in our monthly song circles and regularly posts articles on Sing Shanties, aka the Longwinded Shantyman.

Mark first took the helm of a junk-rigged schooner in fourth grade. After a childhood of racing rubber-band-powered paddle boats and collecting cartons for the Milk Carton Derby race on Seattle's Green Lake, it was just a matter of time before he stumbled upon a tall ship.

Mark slipped in through the hawse pipe and eventually worked his way up to Mate before becoming the Northwest Regional Port Captain of the Grays Harbor Fleet. During his many years with the fleet, Mark had the opportunity to work with many of the nation's top shanty men and women, using the traditional working songs of the sea in the context in which they were first created and sung: To hoist anchor, sail, and yard - to load and stow - to pass the time - and to pass on the multitude facets of the life of a sailor through the medium of song.

This is a FREE, family-friendly gathering where "singin' is encouraged, but knot required". Coffee and tea is provided. Snacks are welcome. We have songbooks to sing from during song circle, and new ones available for purchase.

Location: The Uptown Community Center at the corner of Tyler Street and Lawrence Street across from Aldrich's Market.
Time: 6:00 p.m. to 8:30 p.m.
Posted by Unknown at 4:26 PM No comments:

We have all had them, those days from hell we wish we could forget.

At sea, days are divided into watches - and just like those days ashore, some watches devolve into awful hours that you wish you could forever erase from your mind. The nautical term “watch” finds its roots in the sailors who stood on deck, watching the waves, shore, and sky. The time pieces used to keep track of the duration of each watch became known as watch glasses. This remained constant into the modern world and is the origin of the name of the instrument strapped to your wrist - (until Apple screws us all up by renaming it the iTime).
A vessel’s watch is similar to any gathering of people who regularly face a common adversary. After a time the constant pressures of duty either draws a group of sailors together or blows it apart. For this reason watches become especially memorable and often take on names - names beyond their typical designation of First Watch, Middle Watch, Morning Watch, etc. These team names can get quite creative and often summarize the ideals or quirks of the group of sailors they brand.

A friend once ask me to pick him up some monkey pickles at the store. When I gave him the classic, “come again?” look, he explained that, to a monkey, a pickle is yellow fruit that said monkey must peel in order to eat. I returned a short time later with a basket full of musa acuminata and my mate whipped up banana splits, which we promptly devoured. His odd term retreated to the back of my mind until 2002, when I dredged it up to christen a particularly dreadful watch.

…So there we were - over a decade past and still not far enough back to rinse the foul taste of the whole lousy affair from my mouth. The Pacific Northwest had just survived its first modern day gathering of international tall ships - and being Washington State’s Tall Ship Ambassador, the brig Lady Washington had played host to the festival. Her crew was completely exhausted when the Lady at last docked in Eagle Harbor, in order to load a brig-full of passengers, each of whom expected to spend an epic week in the San Juan Islands, with a bright and cheery ship’s company, bent on serving their every whim. That wasn’t going to happen, given the current energy level on deck - and what our punch-drunk crew needed from its captain right then was one of those memorable halftime speeches that Hollywood shoehorns into all its feel-good family films. What we got instead was a rambling diatribe about the lack of support from the office and an hour’s forced-rest in the blistering late-afternoon sun. It was nearly dark by the time we had loaded passengers, had everyone’s gear stowed below, and were at last ready for the transit to Port Townsend.

I had already spent my day parading the brig on a crowded lake the size of a punch bowl and then threading her through narrow canals, under draw spans, and onward through the Ballard locks - nearly running her aground at the entrance to Eagle Harbor. I was now ready to swap careers to something easier… like being a matador, but I knew the route we were scheduled to transit tonight. Tomorrow’s passage up Rosario Strait was a different story. For that I needed Kevin, my alter ego (and co-Mate). I had never piloted the Lady north of Cypress Island; He had. That left me with the short straw, volunteering to stay up for night watch, to battle the currents off of Marrowstone Point during the coming flood. Kevin gladly hit the rack to rest up for the long day tomorrow.

No one expected help from our captain. Of every man (and woman) I had ever served under, he was the most useless piece of flotsam to have ever walked the decks of the Lady. I find that odd. We usually attract and train the best. Still, you play the hand you’re dealt and so I sized up the two sailors the old man pushed in my direction and tried to ignore his grunted comment about waking him before we tied up, giving back only the courtesy of a nod and “Aye Sir” before taking the helm.

A girl and a boy. That’s what I got. A giant of a girl to be sure, but a girl non-the-less: A pretty, fresh-faced teen who, up until now had seemed inseparable from her equally young and attractive girlfriend. She was either Prairie or Cherlynn - (I couldn’t ever keep the two of them straight.) Glancing at Kevin’s watch bill, I saw the roll of the dice had awarded me Cherlynn and Jesse. Peering closer at the lad I determined him to be less of a boy and more of a Neanderthal. That general assumption stemmed from posture, dreadlocks, choice of clothing, and general demeanor. My first impression about people is generally wrong, so I smiled brightly and put them to work: Asking Cherlynn to do boat checks and Jesse to stand bow watch.

Cherlynn didn’t have a flashlight. Jesse couldn’t find his glasses and was blind without them. Both shrugged their excuses and just stood there. Sighing heavily, I handed the tall blonde a red penlight, tightened my grip on the tiller, and ordered Jesse to remain where I could keep an eye on him.

Thus began Monkey Pickle Watch. Better than nine hours at the helm… following a twelve hour day… after two full weeks. One exhausted watch leader and two green kids. And all three of us must have been completely bananas to have even attempted that run. No current chart. No on-deck radar. Only the watch on my wrist, a compass, a log and a lead-line, guiding two hundred tons of Lady - smashing her way forward - all of Puget Sound flooding against her - the brig being driven alternately by a three-hundred-horse surplus landing craft engine and over one thousand unrestrained white mustangs overhead. Onward we plunged, through a sleep-deprived nightmare the color of our captain’s soul.

And that my dear reader is why there are shanties. And you better believe we sang them loud enough to rouse the dead.

I know now,
Just what I will be,
A sailin’ Jack,
In the Royal Navy.

Boats and ships,
Are the life for me,
An’ I’ll spend my days,
On the deep blue sea.

I’ve got webbed feet,
So has me Mum,
She’s a flippin’ mermaid,
Tattooed on me bum.

Under my pants,
There is a tail,
That’s ‘cause me Da,
He’s a bloomin’ whale.

Bless my whiskers,
Bless my tail,
I’ll waddle to the sea,
An’ I’ll learn to sail.

Well, imagine me,
A sailing Jack,
With my bosun’s pipe,
An’ my sailor’s cap.

A lovely brig,
Lyin’ on the bay,
Well, let’s hoist the yards,
An’ get underway.

We’ll sober up,
An’ all make bail,
Stagger to the sea,
An’ we’ll learn to sail.

Note - This shanty has not been sung for eleven years (as far as I know). It was retired after that fateful voyage.

P.S. “My first impression about people is generally wrong”… It was. Cherlynn went on to sail Lady Washington to the Caribbean, acting as the sailing double for the mute pirate in Curse of the Black Pearl, and Jesse, oops… I meant to say the handsome man who is now Captain Jesse… Both are brilliant sailors who I would follow into hell.

By Mark Olson, The Longwinded Shantyman

Posted by Mark Olson at 9:20 PM No comments: