This morning my attention was caught by a facebook post by one of my friends that is currently serving in the US Navy. He said...

"So, a while back my mom sent me a couple of small, rectangular pieces of cloth with mermaids embroidered on them. I set them aside after admiring them for a bit, and forgot about them.

I recently learned that these little bits of cloth are called "liberty cuffs," which old-school Sailors used to sew into the inside of the cuffs on their Dress Blues. They'd flip the cuffs when out on liberty, since all Sailors had to wear Blues on liberty until the 1970s or so, when the Navy quit making Sailors wear Dress Blues on liberty. I had no idea!"


This instantly piqued my curiosity. As singers of Shanties and Maritime songs we learn a lot of history and tradition of the sea, but here was a tradition that I'd not come across before.

I delved into the interwebz to see what else I could find out about this tradition. The information is scarce, but here is the basic story.

Liberty Cuffs first appeared approximately the late 1890s. They were found all over but were most commonly made in Asian ports or may have been individually embroidered. The cuffs would be sewn inside the dress blues, using hidden stitching, so the uniform appeared regulation from the outside. As soon as the sailors were allowed to leave the ship and go on "Liberty" they would flip their sleeves or roll them up a little, displaying the Liberty Cuffs instead.

Common designs for the cuffs were Dragons, mermaids, Nautical themes such as Neptune, and various other designs.

In the late 1950s machine made mass produced Liberty Cuffs appeared but the cuffs started disappearing in the early 1970s when the lower pay grade, enlisted personnel were allowed to wear civvies from shipboard liberty.

Visit Navy Dress Blues, Taylor Mades and Liberty Cuffs  for more information or to see pictures of many examples of Liberty Cuffs.
Posted by Catisfaction at 11:23 AM No comments:


We're changing things up a bit for the month of November.

Since the Northwest Maritime Center rented their meeting spaces out the evening of Thursday, November 1, and the cafe (Velocity) inside the Chandlery, under new management, closes at 2:00 p.m., we found ourselves homeless this coming month. To the rescue, Port Townsend Senior Association's Eleanor Stickney, manager of the Port Townsend Community Center, has reserved the main meeting room (capacity 130) of the Port Townsend Community Center for us to gather November 1st. Thank you!!

Although inconvenient to those who arrive on foot by ferry, it's a great location and meeting space. For those traveling via the PT ferry and walking, simply email us at singshanties(at)gmail(dot)com to request a ride from and to the ferry. Several of us are available to transport you from the ferry landing to the Community Center in Uptown. We will make sure you leave the song circle in time to catch the ferry, although the song circle goes until 8:30 p.m. 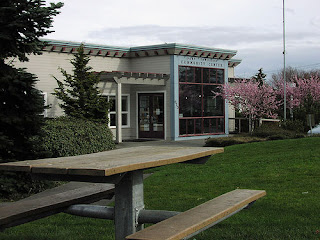 If  you don't know where the Community Center is located, it's in Uptown Port Townsend at 620 Tyler Street, bordered by Lawrence and Taylor streets; across from Aldrich's and Printery Communications.

Here's the November Song Circle flyer to print and post or email to family and friends  - the small print in the flyer is Mark Olson's bio, our November's song leader, whom many greatly enjoyed leading our Sing Shanties Song Circle this past July:

When Mark Olson was seventeen years old, the sea tried to claim him. A deal was struck with Poseidon on the deck of that smoldering wreak that has held for thirty-three years. Always just one step ahead of Davie Jones, Mark has navigated the waters of the West Coast in everything from a rubber raft to a traditional square-rigger. It was during his many adventures that Mr. Olson found himself using shanties as part of everyday life. He has had the fortune to ship with several of the world’s renowned shantymen and maintains the unique perspective of using music not only as a tool to motivate and keep a working rhythm, but additionally - to keep our history alive. 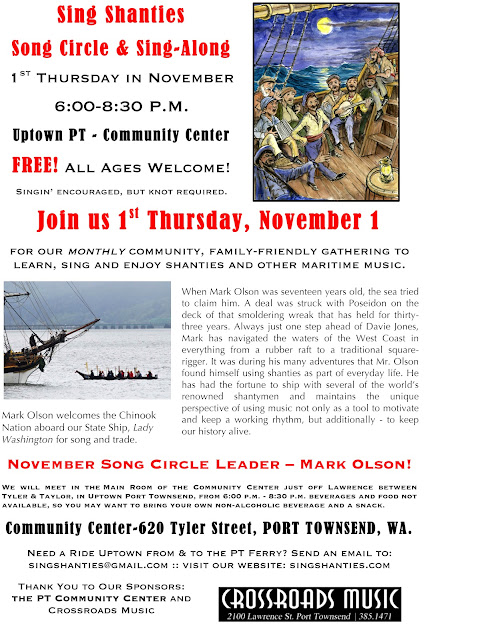 Here is the photo enlarged. The expanded caption - "Mark Olson (on the bowsprit) welcomes the Chinook Nation aboard our State Ship, brig Lady Washington for song and trade." 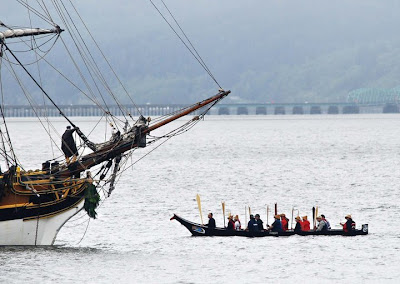 Keep on singin' shanties! See you Thursday, November 1, at the Port Townsend Community Center in Uptown at 6:00 p.m. Remember, we have new songbooks for you to borrow during our song circle and to purchase.
Posted by Unknown at 12:33 PM No comments:

Two and a Quarter Centuries Ago


Columbus sailed the deep blue sea in fourteen hundred and ninety three. That’s what we all learned in school. Except it isn’t. Christopher Columbus sailed the ocean blue in fourteen hundred and ninety two. And just what did he accomplish on that fateful voyage? He settled America - right? Oops, no - that’s right - he discovered it. Except he didn’t. To the people already living here it was no great surprise that the land they inhabited was already there under their feet. Okay then… but it’s safe to say that in 1492 he was the first person to come from sailing from the east and land on the continent of what would become known as North America… Except he wasn’t and he didn’t. The Vikings preceded him by many years and poor tardy Columbus actually only made landfall in what is now known as the Bahamas, Cuba, and Santo Domingo during his first voyage west to “India”.

History is a fickle thing. When you have nothing more than a schoolhouse rhyme to attach an event to it is easy to loose all perspective on the past. Thankfully, we have more than that. We have vessel logs, journals, public records, bills of lading, and by golly - we have shanties.

Come all ye bold Northwestmen, who plough the raging main,
Come listen to this tragedy, while I relate the same;
'Twas on the Lady Washington at Cowper where she lay
And by Queen Charlotte's Islands in North America.

'Twas on November the 2nd day, in 1791,
The natives of this country on board of us did come;
And then to buy their furs of them, our captain did begin,
But mark what followed after, before it long had been.

Up upon our quarter deck, our gun chest there did stand,
The keys they being left in them, by our gunner's careless hand;
The natives they perceiving, thought our ship to make a prize,
Thinking we had no other means for to protect our lives.

Up upon our quarter deck, our captain there did stand,
With 12 of those bold savages with knives drawn in their hands;
All pointing at his body, ready to run him through,
If we should offer to resist--Great God! What could we do?

Then into our cabin, straightway we did repair,
But to our sad misfortune, no arms could we find there,
Except it were two pistols, one gun and two broadswords,
And immediately it was agreed; "fight them off!" it was the word.

Our powder we got ready in our gun room openly,
Our souls we did commit to God, our bodies to the clay;
All standing in one cabin waiting for a sign,
But there could no sign be given for fear we should be slain.

Then with what few arms we had, we rushed on them with main,
And by our being spirited, the quarter deck did gain;
And the number that we killed of them was seventy and odd,
And as many more were wounded, as since we've understood.

Come all ye bold Northwestmen, wherever you may be,
Trust not an Indian savage in North America;
For they are all so desirous, your shipping to obtain,
That they never will leave it off till most of them are slain.

But what’s this? Didn’t I see a reference to Lady Washington in the first verse? Could it be that our fair Lady played a part in history?

You can bet your sea boots she did. It was two hundred and twenty five years ago today that Lady Washington and Columbia Rediviva left Boston to voyage around Cape Horn to the west coast. They would become the first two vessels carrying the flag of the newly-independent colonies to do so, and because one out of every pair has to be in front, the Lady takes the prize as being the first U.S. vessel to succeed in rounding the Horn.
Of course that was back in 1787. It wasn’t until 1791 that the Haida stole Captain Kendrick’s cloths - and when he tarred and feathered a few of those pesky indians to teach them manners - they tried to seize his vessel. Except, (yup, here we go again) that’s not what happened. That’s only what the song tells us. Any historian who is worth his salt can tell you that it was a long-standing tradition for the Haida to attended a trade gathering with every intention of taking away any items that caught their eye. This would allow the entire tribe to see those items and make offers in trade. Then those goods would be returned, along with items of value to purchase them, back to the vessel and the haggling would commence. An honor system used by an honorable people.

Captain John Kendrick either did not know, or did not agree with this arrangement, and called it stealing, so he retaliated - against nothing. Now the words of our song take on a different, more sinister, hue. Now it’s possible that Kendrick had shown up, played the bully, and when those folks had stood up to him, he had ordered them cut down.

So my advice to you is to take a hard look at the songs you sing. They can teach you - a lot. They can also lead you astray.

Oh, and happy Columbia and Washington Day! (No kidding, they celebrate it in Boston.) And now you know why they don’t call it John Kendrick Day.
Posted by Mark Olson at 9:55 AM No comments: